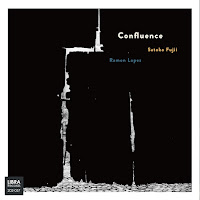 Twelve albums in 2018, one per month, for the Japanese pianist Satoko Fujii, who has  celebrated her 60th birthday, while in 2019 she came back with her cd Stone  in solo piano, already reviewed in this blog. This was followed a few months ago from Confluence which I am going to tell you about, while these days the cd Four is out, in a duo with the bassist Joe Fonda. Furthermore, Entity recorded with New York Satoko Fujii Orchestra and Baikamo in duo with the drummer Tatsuya Yoshida, are coming soon.
Despite the numbers of 2018 was certainly exceptional, this is a   conspicous production from an artist who proves to be artistically prolific.

In Confluence  the Fujii is still in a duo, this time with the spanish drummer Ramon Lopez (among his acquaintances:  Herb Robertson, Ivo Perelman, Joe Morris, Agusti Fernandez and Barry Guy), a meeting with no rules, as told by Fujii. They went into a studio and started playing and improvising between each other, establishing a sound dialectic which gave rise to eight original tracks. Lyrical passages, dense swirls of expressive frenzy, transbordant sound search. Overall a varied mosaic that still paints the Fujii like a musician who combines classic cues with improvisational resourcefulness , free from any established canon.

In this the role of Lopez is not, as one might mistakenly assume, secondary, but it's incredibly important in the exaltation of Fujii's stylistic peculiarities. In "Asatsuyu" the flow of sound already unravels wonderfully traced by a soft, gentle, lyrical and inspired piano  to which Lopez approaches with rare sensitivity giving the illusion of an instrument that magically turns into another one whose sounds are far from being exclusively percussive. His role is setting, enhancing and make vibrating the performance.

It ends with Fujii inspired and lyric , with the title track that rises step by step fixing, as best not it be could  and in crescendo, the confluence of sound emotions of the binomial Fujii-Lopez. A must!

Thank you for sharing this piece! It is very helpful and informative. Would love to see more updates from you.